ATIKU: THE RED LINE BETWEEN CITIZENSHIP AND POLITICS 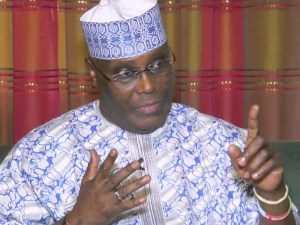 1. There is a bizarre matter (FHC/ABJ/CS/177) ongoing at the Federal High Court Abuja. The plaintiffs are challenging the eligibility of Atiku Abubakar for another presidential run. Their claim is that he is ineligible not been a citizen of Nigeria by birth, a condition prescribed by section 131(a) of the 1999 Constitution. It is distressing that an otherwise ineffective Attorney General of the Federation, Abubakar Malami, formally a defendant, has thrown himself into the centre of the suit by vigorously supporting the claim, submitting, through his counsel, Oladipo Okpeseyi, SAN, that the former Vice President of Nigeria was indeed not a Nigerian citizen by birth. This effectively argues that Atiku Abubakar held that high office illegally, if not fraudulently.

2. Atiku was born on November 25, 1946 in Jada in the former Northern Cameroons, a territory subsequently incorporated into Northern Nigeria on June 1, 1961 after a plebiscite. It is argued on behalf of the Attorney General that Atiku Abubakar is not a Nigerian citizen by birth (a critical eligibility requirement for presidential candidates) by section 25(1) of the Constitution since he was not “born in Nigeria before the date of independence,” as required by the terms of the section. Northern Cameroons was not a part of Nigeria until June 1, 1961. (Just to be clear, Northern and Southern Cameroons were administered by Britain, as a UN Trust territory, bundled with Nigeria but as separate territories.) The Attorney General argues that, although persons born in Northern Cameroon before the plebiscite are “Citizens of Nigeria, but not citizens by birth. Consequently, only citizens born after the 1961 plebiscite are citizens of Nigeria by birth.” The former, according to him, are “citizens by plebiscite.”

4. The effect of the amended 1960 Constitution and the 1963 Constitution was not lost on constitutional scholars. For example, Dr. Arthur Nylander, in his THE NATIONALITY AND CITIZENSHIP LAWS OF NIGERIA (1973) page 27 provided the following illustration: “A was born in the Northern Cameroons in 1930. His son, C, was also born there in 1950 and remained a British protected person on 31 May 1961. C became a citizen of Nigeria on 1 June 1961.” In this example, we can conveniently substitute Atiku’s father for A and Atiku for the son C. The 1960 and 1963 Constitutions did not create a separate category of so-called citizenship by plebiscite. Rather, it assimilated the population of Northern Cameroons into the category of citizens by birth.

5. The Attorney General misconceived section 25(1) of the 1999 Constitution. The provisions says “Every person born in Nigeria before the date of independence.” Atiku was born in 1946, before the date of Independence (1960). “Nigeria” in the clause cannot be read as limited to the Nigerian territory at the date of independence but the space called Nigeria now because the phrase “before the date of independence” is not a qualification of “Nigeria.” It is instead a reference to a population born at that date. This is not merely a correct literal interpretation of section 25(1) but it speaks also to its purpose or object (purposive interpretation). Otherwise, it would result in the great and unconscionable absurdity that the Northern Cameroons population that was expressly granted citizenship by birth by the 1960 Constitution (as amended) and the 1963 Constitution respectively are effectively stripped of their Nigerian citizenship by the Constitution of 1999. For, there are only three modes of acquisition of Nigerian citizenship in third chapter of the 1999 Constitution, and none accommodates so-called “citizenship by plebiscite.”

6. As a matter of principle, the Attorney General of the Federation should not lightly make submissions carrying grave constitutional and political consequences. Challenging the citizenship of Atiku Abubakar also challenges the Nigerian citizenship of the entire population of the former Northern Cameroons incorporated into Nigeria in 1961, condescendingly discounting it to second class citizenship. That is not good for Nigeria and is utter disrespect of the Constitution. This Attorney General has disrespected the Constitution and his office enough.