Lawyers should not worship in Military “Courts” fully robed.

First, a Court Martial is NOT a Court. Although, popularly referred to as a Military Court, it is best described as a tribunal which is constituted by recognised authority to hear and try special offences committed by only members of the armed forces in active service.  The constitution of a Court Martial is likened to a panel consisting of a president, at least two members, a waiting member, a liaison officer and a Judge Advocate. Some apparent similarities between a regular court and a Court Martial is that, both have jurisdiction to impose a death penalty; both cannot sit on a public holiday or Sunday except it is imperative to do so; an accused person appearing before both has a right to competent legal representation. Importantly, the structure of a Court Martial presupposes its own dissolution after the conclusion of trial. This means that it is merely an ad-hoc tribunal.

The Nigerian legal profession is one which best interprets the age long adage: “Dress the way you wish to be addressed.” In the Nigerian ‘legal sphere’, almost every conduct of a legal practitioner whilst in professional capacity is specifically regulated by the Rules of Professional Conduct 2007 (RPC). Rule 6 (b) of the RPC states that:

“While the court is in session, a lawyer should not assume an undignified posture, and should not, without the judge’s permission, remove his wig and gown in the courtroom. He should always be attired in a proper and dignified manner, and abstain from apparel or ornament calculated to attract attention to himself.”

As seen, the dress code for lawyers was captured (especially as regards the popular wig and gown), though not wholly. Hence, the Council of Legal Education filled this lacuna by using the instrument of the Legal Practitioners’ Act (LPA) to clearly state the appropriate dress code for all lawyers which include the black suits, black shoes, white shirts, collar or collaret, the wig and of course, the Barristers’ gown, for that ‘the law’ effect. This prescribed dress code must be strictly adhered to when appearing before superior courts of record and this has been judicially recognised.

Now, the apple of discord here relates to the propriety of lawyers appearing robed before a Court Martial. Ordinarily, it is easy to say that if members of the panel of a Court Martial are clad in their ceremonial regalia, flaunting their acquired medals and ranks, it is only harmless for a Minister in the Temple of Justice (a lawyer) to appear, with not just his dark colored suit, but a wig and gown to match. Isn’t it? Not quite. That is constitutionally and professionally unacceptable. The essence of being robed is that it serves for identification and communication between counsel and the presiding judge in a court of law. So, why can this essence not be actualised in this instance, you ask? Answer: (Read the first sentence in this article). The rationale is that a Court Martial is seldom constituted by a judge but a high-ranking military officer, and so, it is regarded as an eyesore for a lawyer to appear robed before a non-judge. It is immaterial that what is being performed is a quasi-judicial function. The provisions of Section 6(5) CFRN clearly do not vet a Court Martial and so, it is an outright contravention of the Constitution and the relevant Codes for a lawyer to appear robed before a Court Martial, being an inferior “court”.

Perhaps, it is important to mention that lawyers are allowed to represent persons before every tribunal required to abide by fair hearing principles. This representation does not require putting on wig and gown at all times. A lawyer’s advocacy functions outside courtrooms (superior courts of record) can be performed without being robed.

In conclusion, it can be recalled that in 2016, a directive was once issued by the Chief of Army Staff, stating that all civilian lawyers are expected to appear before the Court Martial, robed. As expected, this order was rejected as highly unacceptable by many reputable lawyers in the country because, it is against the principles guiding the appearance of a lawyer. This discrepancy is yet to be laid to rest. At this point, I must submit that in the light of the subject matter in view, there is a plethora of reasons I could add in furtherance of the current position that a lawyer should not appear robed before a military court, however, freedom from garment layering and a well-deserved break from perspiration in hot and steamy court rooms definitely top my list. 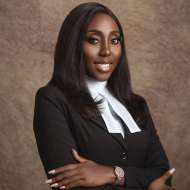 Author: Shalom Alugwe
Shalom is a lawyer, speaker and a social entrepreneur with proven knowledge of legal research, alternative dispute resolution, international law and litigation. She is an associate of the Chartered Institute of Arbitrators, UK and also a certified expert in Intellectual Property and Copyright Law by Berkeley-Klein Institute of Harvard University. Fondly reckoned as a global citizen, she has lent her voice in the field of social impact and international diplomacy by chairing various Model United Nations conferences, locally and internationally. She is the founder of Hopevillle, a non-profit organization which was recently recognized by the UN ECOSOC Youth Forum for its contributions in restoring and rebranding youths in the unserved regions of Nigeria. Whilst being notorious as a television favourite, her creative thinking and persuasive skills can surely make you believe that the Statue of Liberty is in Lagos.